When Two Springs Are Better Than One

This year there are a lot of new, stronger, more durable tape measurers that stand out more and more. DeWalt calls theirs XP, for Extended Performance.
It has a great belt clip that is the easiest in the industry to get onto your belt, and it stays. The belt clip might look cheap but that straight design is what works better than all that have come before it. The wide hook catches onto just about anything, even with the blade on its side. But what is not marked on the tape is actually its most exciting feature—the Dual-Core spring.
Why have one spring that is forced at the end of pull-out, and not very strong at the end of the return, when you can have two springs? They do not work in parallel but in series, so that when one is maxed out the other starts to turn. This means less force on the hook while pulling out, and a smoother and easier return on the way back. You can actually feel the difference. Look for “Dual Core Technology” on packaging.

The Tracking Point
Diablo has put a special tooth on their new 7-1/4”x 24” tooth-framing blade. They call it the Tracking Point. In a traditional framing blade where all the teeth are in alternate grind positions, the kicking back and forth can cause vibration and result in poor cutting, requiring a thicker blade to maintain control. By having every third tooth pointed in the centre, that left-right vibration is stabilized after each kick left and right—eight times per blade rotation. This keeps the blade stable with a much thinner blade, and thinner blades can cut easier and faster simply because they are removing less material. This also helps to prevent the grain from drawing the blade to one side during ripping.
Perhaps what is most amazing is how this blade performs cutting through tougher material, such as nails and even lag bolts. First, it has  very solid Freud carbide behind it; second, it is a thinner blade, hence cuts less metal while getting through a nail, screw or lag bolt. Lastly, that left-right-centre point series means that a tiny chip of metal on the left is cut out, then cut out on the right, then cut out in the centre, so, at no time does a single tooth hit the metal the full width of the kerf. The result: the teeth stay cooler and last longer.
For the moment, they only have the Tracking Point on 7-1/4” blades, but this is part of what makes the new, larger, cordless, circular saws cut longer and the old, corded ones perform better.

Finally, a Canadian Double-Ended Driver
I don’t really like to get Canadian chauvinistic but every time a U.S. product arrives with a Philips/Slotted double bit I want to send the whole tool back. Let’s get serious: driving a slotted screw with a power screwdriver just doesn’t work; still the Americans have not seemed to figure that out yet. The Robertson square socket screw is the item that distinguishes Canadian construction from U.S. construction. Finally, however, Milwaukee has brought out not only a Philips/Robertson driver but they offer us one that won’t fall out of the gun; there are locking grooves in both ends. In addition, that red shank indicates that this is built for an impact driver.
That’s a good start boys, but do you really impact-drive Phillips screws? How about a double-ended Robertson #1-Robertson #2 and a double ended Robertson #2-Robertson #3 to make some all-Canadian drivers?

An Extension That Doesn’t Create More Problems Than It Solves
While I’m thanking Milwaukee for some good thinking, I should mention their new SHOCKWAVE bit extensions. Extending the bit is fine, but can it transfer the power? And how often does that bit or socket get left stuck in the fastener? So, Milwaukee made all their SHOCKWAVE extensions from 2-7/8” to 18” to be impact drivers; in addition, the head is finally a locking socket that grabs that locking groove in good bits. That brings these extensions close to perfection.

Industrial Quality Oscillating Tools Are Also Approaching Perfection
A year ago, I mentioned that Fein and Bosch joined together to create a new style blade mounting that gives better power transfer from the motor to the work by strengthening the blades and eliminating slip. They call it StarLock. It is a three-dimensional “cake tin” shape that moves away from using lots of little pins to grab the blade, and instead uses the entire reinforced 3D shape to pull the blade snug. The initial StarLock launch purposefully had holes to allow using the new blades on almost any existing oscillating tool. StarLockPlus blades have fewer of those “compatibility” holes, giving more strength and less vibration to the blades.
One of the problems that evolved with multiple blade mounting systems was that poorly fitting or poorly made blades slipped enough to start knocking the little mounting pins off of any powerful tool under heavy work. Finally, Fein has launched their StarLock industrial duty tools that will no longer use any of the old flat blades or no-name copies.
The first advantage you will see is a true no-tool blade change that takes three seconds. Pop the handle on the top of the tool, and the blade falls off; push the tool mount over a different blade or just a repositioned blade, and the blade snaps completely solidly into place. No tool required, no locking pin to loosen, and you can’t possibly put the blade on crooked. The central pin snaps open to pull the blade down and lock it there. All the power transfer is happening around the tapered 3D perimeter.
The oscillation tool, as a “system”, will be complete with the arrival of the StarLockMax blades next fall—having the most metal in the blades, and best transfer of power with less noise from the new StarLock tools. Buying the blades you use all the time in bulk brings quality blade prices down radically. Fein and Bosch StarLock blades are interchangeable. 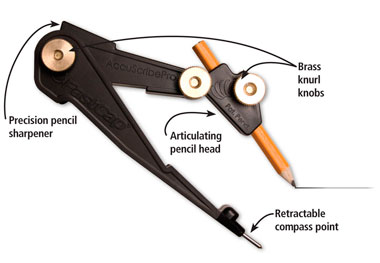 An Articulated Scribe for All Shapes
The AccuScribePro, from www.FastCap.com, is about the most versatile scribe I have seen. It can slide flat on a tracing edge, assuring the pencil is always the same distance away. It has many little ledges or indents that will allow you to follow even “often difficult-to-follow” surfaces. With the articulating head, you can trace on the backside, mark on the front side, and deal with difficult angles. With its retractable point, you can slide along curves or use it as a centre point for circles. It will hold a pencil, a pen, and a sharpie, and it has a built-in ordinary pencil sharpener.
In a shop, it works perfectly; however, on a site, where things are a bit rougher, it tends to slip a bit—despite nice brass knurled knobs. Changing out the knobs for wing-nuts gave me the no-slip firmness that I required. FastCap.com is an interesting place with a lot of innovative tool ideas that work outside of the major brand names.

The Pogo-Stick Shovel
The first week I was at a construction site with my new steel-soled boots, I remember jumping up and down on a shovel and actually bending the sole of my shoes. The new Stanley FatMax Round Point Steel Shovel is what I needed. Look at the reinforced foot grid on this tool! You can mount this thing like a pogo stick. The 48” handle is made of steel with fiberglass reinforcement, and one side of the blade even has saw teeth on it for cutting roots. Available at Lowes and Rona for $40.