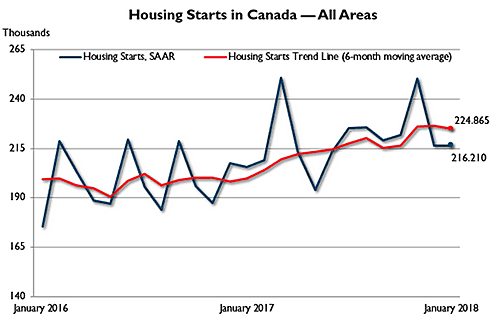 Canadian housing starts maintained a seasonally-adjusted pace of 224,865 in January, nearly identical to the 226,346 in December 2017, according to Canada Mortgage and Housing Corp. (CMHC).
“The national trend in housing starts held steady for a third consecutive month in January, remaining near the 10-year high set in December,” said Bob Dugan, CMHC’s chief economist. “This reflects higher starts of multi-unit dwellings in urban centres in recent months.”
For the second month in a row, housing starts in the Toronto area trended slightly lower. An increase in apartment starts partially offset the decline in single-detached housing starts.
“New condominiums remain in high demand as homebuyers flock to relatively lower priced homes, and investors seek to capitalize on low vacancy rates and increasing rents,” CMHC noted.
Starts for all home types in Metro Vancouver were up in January, reaching a pace nearly double that of the same month in 2017. There were 2,599 housing starts across the region in January 2018.
Across Canada, multi-units essentially held steady at 134,685 units in January while single-detached starts increased by 0.6 per cent to 63,715 units.